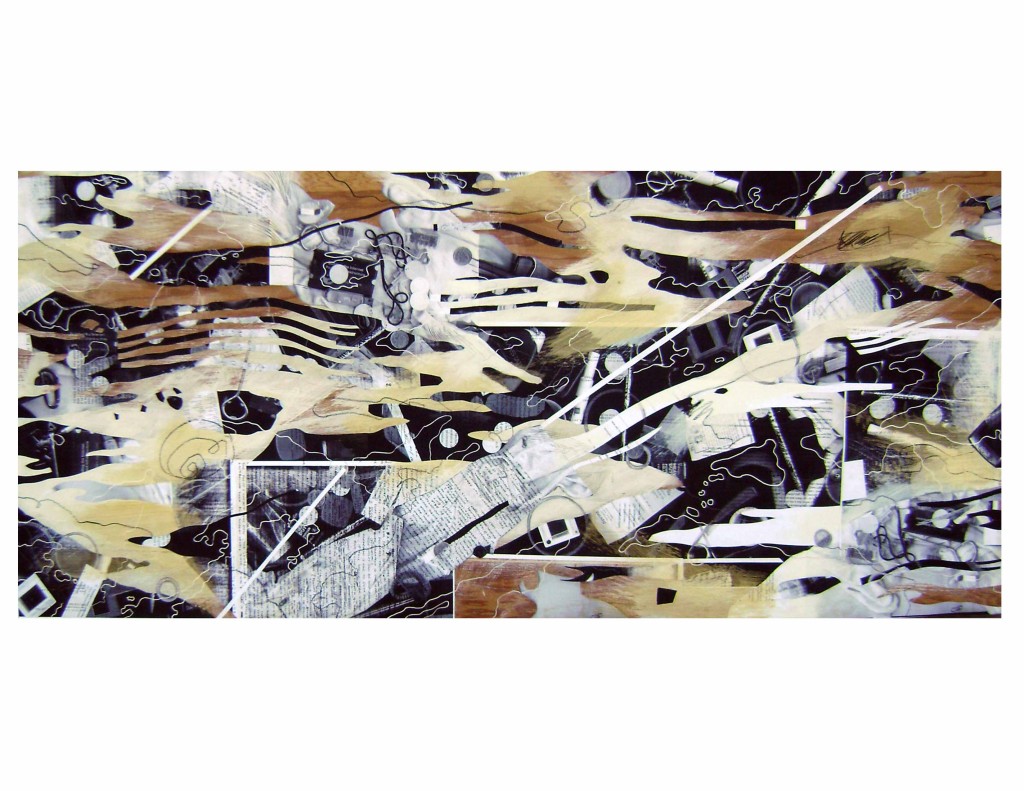 This particular art piece is part of a series called Convolution. It conveys several themes. One theme deals with the idea of Industrialism creating materialism. Globalism is the product of Industrialism, and Globalism creates Capitalism, then Capitalism creating consumerism, which ultimately creates the idea of materialism. So, the piece conveys materialism being the ultimate production of Industrialism. The materialism concept is shown by the imagery within the collage patterned pieces. Consumerism is the product of globalism which makes us materialistic, because of what is induced on us by society everyday and over time. Another theme is the idea of binary opposition. Binary opposition is an anthropological concept that deals with existence of opposites — an idea that complements itself, like in Buddhist belief, the idea of binary opposition exists. Positive needs negative to exist. Therefore, it becomes balanced. In this visual piece, the achromatic colors of black and white is utilized. It connotes the idea of binary opposition. Another example of binary opposition that I come to use is the idea of attempting to make things simplified but ultimately becoming complex. It becomes complex as I overlay images upon images. The result is a dynamic and interesting abstract work. One last theme I am noting in this series is the idea of using recycled materials. The substrate the images are on are recycled papers that I have collected for more than a decade now. The recycled papers have writings and notes that connotes that idea of material collection (concepts and ideas) over time. I incorporate imagery within imagery by taking pictures of trinkets and things that are in my desk  drawer and digitally printing them on the recycled papers that I have collected. Those trinkets and things are symbols of the idea of material continuum produced by consumerism. Overall, the complex overlays of imageries, the opposition of value and balance, and the the idea of material continuum creates the abstractness for the series of Convolution.